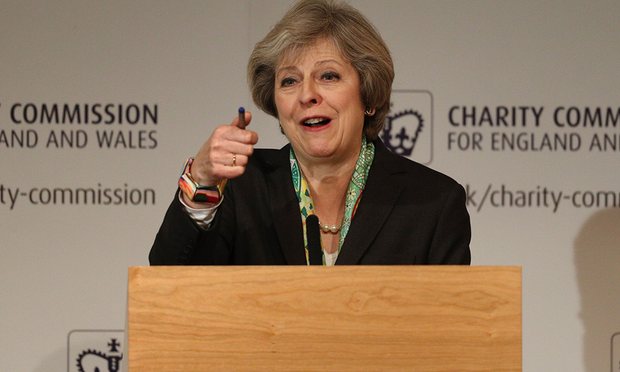 Earlier in January Theresa May gave a speech at the Charity Commission’s annual public meeting where she set out her vision of a ‘Shared Society’.

First of all, there is much to admire about what the Prime Minister said.  She described a society of social equality and justice for those facing hardship or just about managing. Obviously these are themes which resonate very strongly with the charity sector.

And it is good to be reminded that the government is not entirely preoccupied with Brexit to the neglect of everything else.

However, simply using the word ‘society’ a lot – as if to remind people that today’s Conservatives have abandoned Margaret Thatcher’s aphorism that there is no such thing – does not a strategy make.

Plus, didn’t David Cameron once promise to unleash civic potential through the ‘Big Society’?  Indeed, if you compare Mrs May’s speech with Mr Cameron’s speech about life chances on 11 January 2016, the new vision doesn’t sound so new. But let us be charitable.

Having set out her vision of a Shared Society, Mrs May talked about tackling the “burning injustice” of mental health and inadequate treatment. Although her speech was light on detailed policy, it did contain a few snippets about improving mental health in schools, the workplace and the community. For example:

All to be applauded. But, given the current education funding crisis, I am sure head teachers will be concerned about any additional cost implications for schools.

Likewise, it is warming to see the Prime Minister talking to charities about things that matter to charities – tackling poverty, housing, social care, mental health and so on. And she acknowledged the sector’s key role in helping to change social attitudes to mental illness.

Again, David Cameron also talked a lot about charities in the early days of his premiership. But by the end of his tenure the Big Society had given way to gagging clauses, poor relationships between commissioners and delivery organisations, and attacks on charitable campaigning.

Crucially – and what may set the Shared Society apart from the Big Society – Mrs May also appeared to recognise that the state can have a positive role to play in actively improving people’s lives rather than just getting out of their way.

It was also very comforting to hear Mrs May talk positively about how, through political campaigning, charities can expose injustices and ensure politicians take action to put things right. Few charities would disagree.

Furthermore, it is good that Mrs May has put this into practice by abandoning the previous government’s gagging clause, which had prevented charities in receipt of government funding from giving policy advice based on their experience of working with vulnerable people.

Let us be hopeful

As with all government initiatives, it remains to be seen whether the Shared Society can develop sufficient cohesion and momentum, nourished by proper funding, and cultivated by a new partnership with government to form the root of the government’s agenda; or whether it will simply wither on the vine of good intentions.

After all, Brexit will inevitably dominate government and Conservative Party politics until the UK leaves the EU and beyond. Other distractions will also crop up – or, as Harold Macmillan used to term them, ‘events’.

A key indicator will be the Work and Health Programme, which is due to commence later in 2017. Will it simply recreate the commissioning and funding problems associated with the previous Work Programme or has the government listened to the charity sector?

If the government really is keen to form a new partnership with the sector, here are two other ways in which it could make life easier for charities:

In the meantime let us be positive and hopeful that the Prime Minister’s vision of a Shared Society flourishes and becomes more than just a vision.